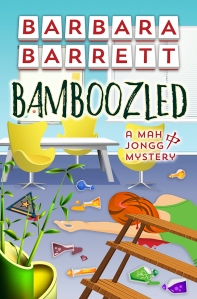 Essential oils distributor Dorcas Wiley is the boss everyone loves to hate. So when she turns up dead, killed by her own trophy, disgruntled saleswoman Cathy Broderick is the obvious suspect in her murder. Despite opportunity, motive and incriminating evidence, Cathy declares her innocence and enlists her mah jongg pals—Sydney Bonner and her cronies Marianne, Micki and Kat—to help save her from the death penalty.

Hot off a recent and nearly deadly investigation, the women are cautious about putting themselves in peril again. Syd’s spouse isn’t thrilled about another mystery in their lives, either, but he can’t resist the plea of Cathy’s husband. Soon, Syd is leading the way as they tangle with grumpy salespeople, the victim’s estranged husband and boyfriend, a mysterious housekeeper, a litigious customer, an annoyed sheriff and Cathy’s own arrogant lawyer.

The women have their own issues to deal with in their central Florida town of Serendipity Springs. Kat faces a health challenge, Micki fields a mysterious inquiry from her ex, Marianne has a chaotic anniversary and Syd wrestles with her husband over who’s really in charge.