Love in the Third Act – Book 3 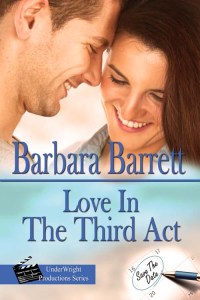 Wedding planner Hadley Mayhew makes the mistake of sharing with new client her mother’s bizarre request to help her find a man, never contemplating the woman will think the idea of a mature child helping their parent reenter the dating game might be great fodder for a reality TV show. Even more surprising, her client wants Hadley and her mother to be her first subjects.

Kevin Barkley had every reason to believe he’d be a huge success as a filmmaker when he won his film school’s most prestigious award. But for reasons he doesn’t understand, fate, or what seems to be fate, keeps working against him. Several producing jobs have eluded him, notably a recent offer that was withdrawn at the last minute. To make matters worse, the showrunner has been spreading rumors that Kevin is difficult.

Temporarily unemployed, Kevin is unable to refuse his aunt’s offer to executive produce and direct her latest project, a reality show about senior dating, especially since the money involved is obscene. There’s just one catch: He must agree to hire Hadley Mayhew, his former best friend in college, as his writer and assistant producer. If they are to work together, can his forgive her for revealing his fiancée was cheating on him?

Bethany rose and shook hands with Hadley. “This has been a great first meeting. I’ll review this contract with my fiancé and get back to you with any questions or comments before our next meeting.” She glanced at her watch. “I’d better get going. I have a fitting to supervise.”

She was out the door before Hadley could reply. Kevin remained behind to pack his equipment, even though the way he was slamming things together, it was obvious he was anxious to leave as soon as possible.

“Is she always like that? All business one minute and gone the next?” She didn’t care about the response as much as she wanted him to speak directly to her. If he opted out of his videographer duties, this might be the only chance she’d ever have to talk to him again. Awkward as things still appeared between them, for some reason, it was important they clear the air.

He stared at the door. “Yeah, more or less.” He slung the straps of two cases over his shoulders and made ready to leave.

Desperation forced her to be direct. “Are you really okay with this?”

His back was to her, but he stopped, set down his equipment and pivoted to face her. “Hell, no.”

The Story Behind the Story

Way back in the Dark Ages when I got married, I was “assigned” a wedding planner by the church. Those of us in the wedding party nicknamed her “Sarge” behind her back, because her main interest was to make sure everything went off on schedule for the church’s benefit. We showed her when we discovered we’d forgotten to bring our marriage license! It nearly killed her when she found out our friends had brought rice to throw; after she intervened with that idea, they wound up heading to the grocery store across the street to purchase bird seed.

Since I never had a wedding planner who focused on me and my fiancé, I thought it was time to make one the heroine of a book. Hadley Mayhew has all the qualities I would have wanted: organized, resourceful, patient and great at human relations. A bit of an organizer myself, I had fun devising the minor setbacks that throw her clients into panic.
I also had fun with the idea of senior dating. Since I’ve been married to the same man for over four decades, this was an area I only knew about through some of my single friends. Although some of my information came from their experiences, more was just from my imagination. I wish I’d known before she reviewed the manuscript that my editor had recently traveled this path. With good results, I’m happy to say. Thanks to her, I added a few more details that lend more credibility to the story.